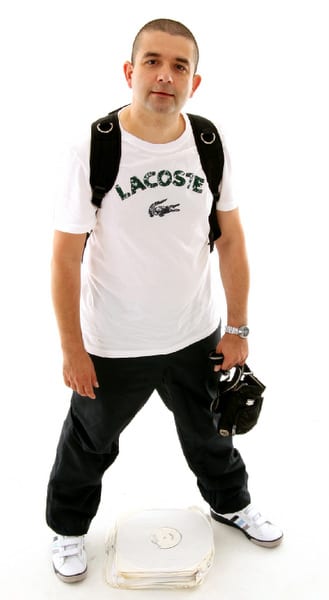 The legendary Nicky Blackmarket has decided to relaunch his Kartoons label, something that, metaphorically, is like ducking down those well-worn stairs into the BM store in Soho itself, to be greeted by that welcome, omnipresent electric vibe running strong, and seeing the man himself grinning at you: it’s familiar and life-affirmingly real. Storming, actually, considering he’s doing it with Voltage.

This year has been good, thank the Lord! Still working hard, travelling to god knows where, serving the public with fresh beats and mayhem. While trying to grab a cup of tea at 4 in the morning! Now I have decided to relaunch the Kartoons label, which I’m really excited about.

What’s the news on Kartoons?

I’ve had a few people enquiring over the years, as to starting Kartoons back up.

The label was originally formed with the record shop that I had in London, BM SOHO, formally known as Black Market Records), in the mid-nineties.

We put out over 30 releases, the most well known being ‘2 Degrees’. Which was by – the now Radio 1 – DJ Target and DJ Trend (RIP). It was an inspiring time for music, and I hope to find some more progressive and evolutionary tunes for this new wave.

What sort of D&B will it encompass, for the future?

It will mostly be dance orientated stuff, but to be fair if something touches the spot, I’m going to grab it.

I really want to showcase the huge amount of talent and dedication we have within the scene and hopefully find some fresh blood. So, if there are any budding producers out there, get at me!

I see Voltage is part of it: has it been a joint effort to get the label going or was Voltage’s outlook simply the best way to kick things off again?

After some years, this year I thought f**k it, and took the decision to really go for it, and what better way to launch but with a collaboration with Voltage.

We have chucked out a few tunes recently that make the floor bounce, ‘Jazz Tickles’, ‘USS Enterprise’ and ‘Dub Tickles’, plus nobody can demolish a burrito like Voltage!

Take us into the release here and what inspired?

It’s basically 1 x dirty baseline monster built to wreck the speakers at a rave and 1 x steppa to shake your ass on the floor with.

My inspiration was all of the above! We’ve had a really great response from the D.J’s that play them and the crowd.

Would this gritty style be typical of a lot of your sets nowadays?

I would say this is a small slice of my style of set. I still prefer to read each individual crowd and pull the tunes out to match the vibe. While springing a few surprises on them.

What cities/countries are smashing it on the D&B front right now? Where’s strongholds?

Germany, with Hanover and Berlin keeping the faith. Canada has also got game!

These have been there since day one, and are always a pleasure to play.

What forthcomings can we expect from you?

AAAHHH now that would be telling!! You’ll have to watch this space!! I can however guarantee, lots of drums and plenty of bass.

Like some more insight into the label? Then check out the history lesson by our own Jamie S23 here, and links below:
Nicky Blackmarket: Uncovered
Prisoners of Technology