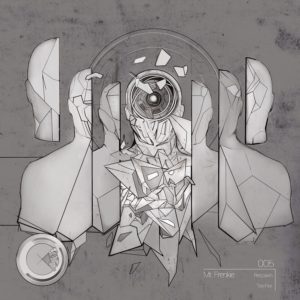 Having previously released on various respected imprints including 20/20 LDN, Dom & Roland Productions, Mindtech and more, as well as receiving critical acclaim from the likes of Noisia, Ulterior Motive, Xanadu and Foreign Concept, it’s clear Mr. Frenkie is turning heads for all the right reasons.

His latest release comes in the form of Respawn / Tire Fire on Concussion Records, and once again showcases his versatility as a producer. We caught up with the Russian producer to find out more about the release, and scored the premiere of Tire Fire on the way. Get it in your ears and read on…

Thanks for joining us for a chat 🙂 Where have we caught you today?

No problem! I just got home from the studio where I teach music production.

Straight to business then – Respawn/ Tire Fire are dropping on Concussion later this month – how did the link with Concussion come about?

First of all I always send all of my nearly finished tracks under the same tag “id” to the neuropunk podcast of Dj Bes to test the waters, so to speak, and get some initial feedback. After that I share it on my SoundCloud profile. That is where Concussion Records offered me to sign. Later on I wrote Tire Fire for them. This is going to be my first fully fledged vinyl EP release. I sincerely thank Adam for his work!

Tire Fire really is an absolute beast. I’m getting real feelings of nostalgia throughout it – it’s evident you draw your influences from the old school… there a particular story behind this tune and was it influenced by anything in particular?

It’s difficult to pinpoint exactly what track or even what artist influenced me enough to create Tire Fire. To some degree it would be Dillinja, Kemal, Dom & Roland, Ed Rush and Optical. I became obsessed with the old school sound a long time ago, and it’s not the first time I am attempting to recreate that “feel” via modern production. I guess this time you could say it turned out a bit too authentic? *laughs*

Turned out great if you ask me! Respawn is full of contrasts, the production is seriously impressive. I love the way you were able to build real atmosphere through the tune, then interrupt it all with a sinister drop. Is there a story behind this one?

Cheers! Yeah, in this particular case I’ve been inspired by the works of Stakka & Skynet, and one very (personally) important remix by Rob F for Typecell – I’d say The best Neurofunk track ever, period. Some of my friends told me that Respawn is reminiscent of the earlier works of Black Sun Empire. Well, if it is so, than I am glad I could relay the old school feel once more!

You’ve had a lot of support from the likes of Noisia, Ivy Lab, Dom & Roland and more – for those who may not know you as well – how did you break into production and get your name out there?

Honest to God, I am as surprised as you are and damn happy to receive such support from renowned artists! In Dom & Roland’s case, I was the winner of his remix contest and was later approached by Dom to publish it on his label (Dom & Roland Productions). When it comes to 20/20 LDN, it is the usual: I just sent them my music. Noisia? Well those guys are always on the lookout for new stuff.

Your style of production is incredibly versatile, from halftime goodness on 20/20 LDN to more technical d&b like this release on Concussion, is it important for you to experiment with different styles of music to stay inspired?

As it happens, I work as a professional arranger and a music production teacher, so I am always exposed to a big variety of genres. Hip-hop, as well as D&B were always there for me… ever since childhood. Later on, I got into House music which in turn gave way to the Phlegmatic Dogs project I launched with a friend. Although you can notice my bass music influence even here…

You’re based in Moscow, right? What is the D&B scene like there?

Moscow is a venue for a lot of big D&B raves involving the world’s best artists and there are almost no local parties. That is the reason why, unfortunately, Moscow’s D&B is of more dance oriented nature and less conceptual.

What have been some your favourite D&B releases so far this year?

As always, Break and the guys from Ulterior Motive. I’ve also started to look at Europe’s new Jump Up scene represented by Upgrade, Digital, Serum & Taxman etc. But I hope that my favourite track of 2017 has not come out yet.

Well, as always, I am preparing a whole bunch of tracks under “id” tag that will be circling around the world’s nightclubs for a long time before eventually getting signed…