Match Of The Deejay: Week Six

The rules: Each week The Risky goes against a guest DJ to predict the forthcoming weekend’s Premiership scores…

At the end of the season we’ll scan the scores in a bid to find the most accurate DJ in the scene (not including The Risky) and give them the very first MOTDJ trophy! 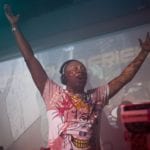 It’s our first international match as Brazilian badman Marky steps up to challenge The Risky.

Our first question to him was obvious… Which nation loves football more: UK or Brazil?

“Culturally I’d say there isn’t much in it,” he says. “Considering both countries home, as I do, I know how much it means to so many people from all walks of life, whether it’s club or country, it’s a serious game!”

A Manchester United fan – thanks, largely, to his son’s passion for them – Marky’s confident about how they’ll fair this season with a smirk and a simple “another league in the bag.”

Will he be able to match his team’s success in Match Of The Deejay? Only time will tell… In the meantime, find space in your dairy for his next Marky & Friends bash at Fabric on Friday July 6 (it’s miles away, so no excuses!) and keep an ear out for Innerground 50, featuring a single from the big man himself.

A few shocking results over the bank holiday weekend have lead to a draw! Marky 5 – The Risky 5. Good game.